We’ve already gobbled up some yummy cupcakes from both the EPCOT and Animal Kingdom theme parks, as well as Wilderness Lodge Resort. Our latest stop was the Magic Kingdom theme park, where we continued our Disney Cupcake Challenge. 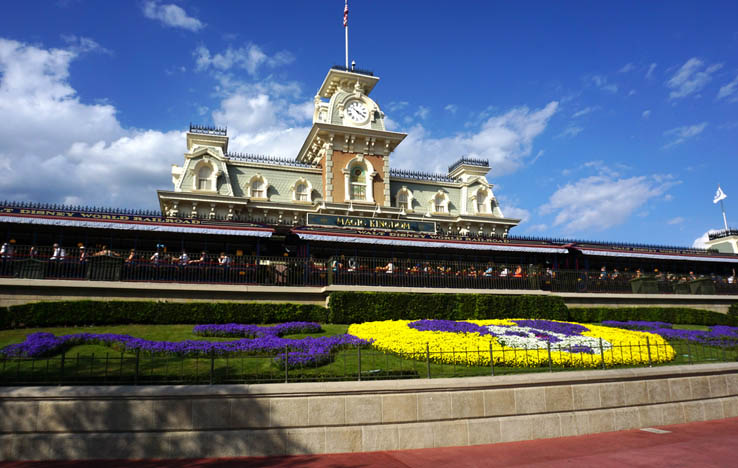 It was a beautiful day at Magic Kingdom! Blue skies, white puffy clouds, and cupcakes on the horizon! 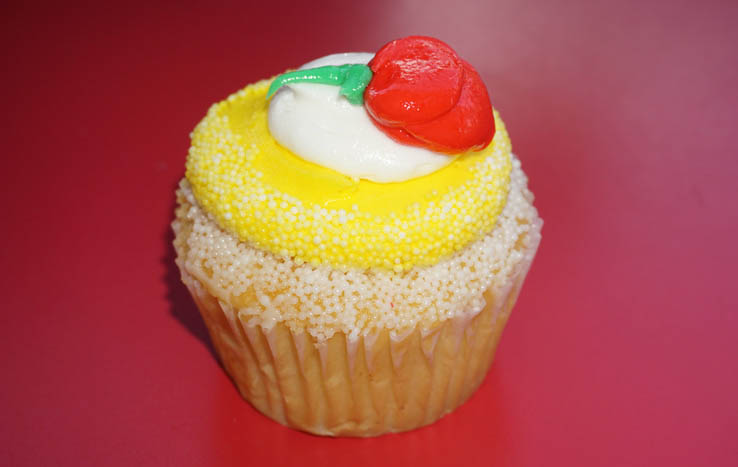 We started with the Belle Cupcake, which is available at the Main Street Confectionery. This is a very simple cupcake, but it’s done well. The cake is vanilla and it’s topped with yellow buttercream frosting with pearls and a red rose decoration. 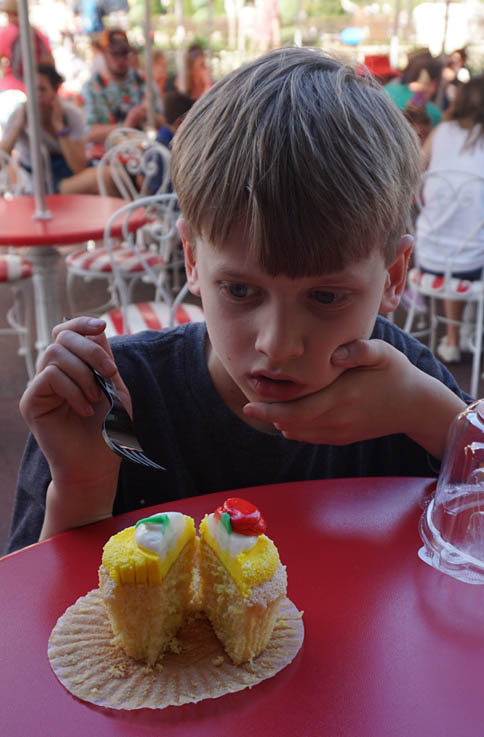 Our Little Dude was trying his best to be patient while I took a few pictures. Once we dug in, we found perfection. The cake was moist and fluffy, but not too sweet. The frosting was just the right sweetness and amount to complement the cake. This seems like it would be a boring cupcake, but because it was done well, it was one of our all-time favorites.

This Beauty and the Beast-inspired Belle Cupcake can also be found at other bakeries and confectioneries on property.

We also decided to try a “bonus” cupcake (really, who needs an excuse for more cupcakes?) from the Main Street Confectionery. 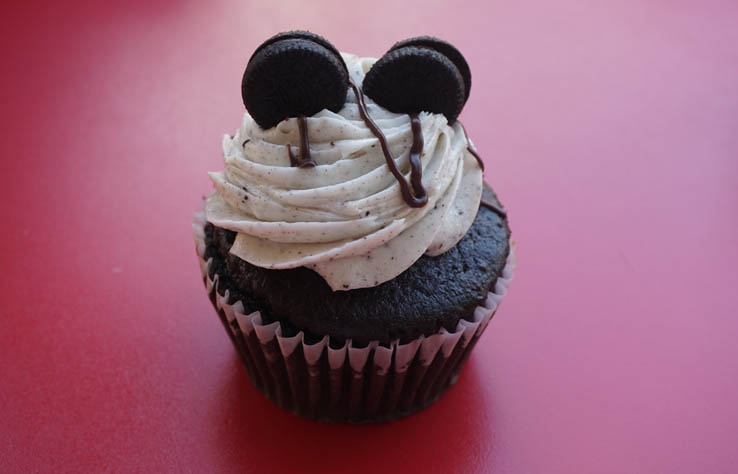 This was the Mickey Cookies and Cream Chocolate Cupcake. The chocolate cake was too dense for our tastes. The best part of the cupcake was the sweet cookies and cream buttercream frosting topped with cookie “Mickey Ears”. We all wanted more of the frosting!

If you’re a chocolate fan, this cupcake will satisfy a craving. But, personally, I’d try to get to the Roaring Fork at Wilderness Lodge Resort for their Campfire Cupcake instead. It’s so much better.

Next on the Disney Cupcake Challenge list was the Master’s Cupcake at Be Our Guest Restaurant. We also decided to try two other cupcakes on their menu, the Lemon Meringue Cupcake and the Strawberry Cream Cheese Cupcake.

The Master’s Cupcake is legendary to Beauty and the Beast fans because its frosting is the “Grey Stuff” referenced in the movie. Lumiere encourages Belle to “try the Grey Stuff, it’s delicious!” So, we decided to try it, too! 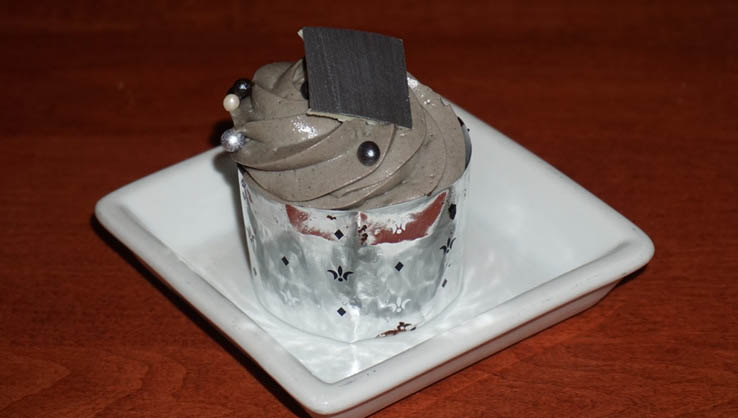 The cupcake is a moist chocolate cake topped with “Grey Stuff”, which is cookies and cream mousse, and decorated with a chocolate topper and crunchy pearls. The Master’s Cupcake is served in a shiny, decorative wrapper.

I have to say, the wrapper is a giant pain to remove. You can eat the cupcake without removing it, but we took it off for photos. I think Disney could come up with something better. But, I’m still going to eat those cupcakes, even if Disney makes me work to get at them! 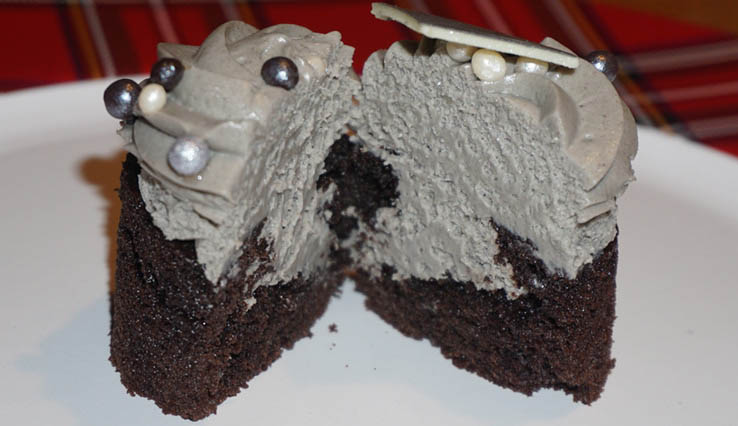 Once you cut into the Master’s Cupcake, it has a ton of frosting in the middle of it that serves as filling. And, Lumiere is right – the Grey Stuff is delicious! It had more of a cream than cookie flavor. Not my favorite Disney-made frosting, but it’s good. If you like white chocolate, you’ll enjoy the Grey Stuff! The cake is good. Nothing extraordinary, but then, the frosting is the star here. 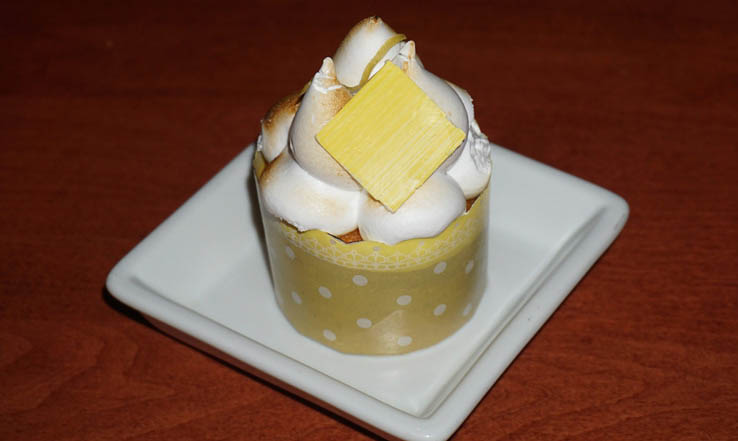 Next up was the Lemon Meringue Cupcake. This was the disappointment of the three. 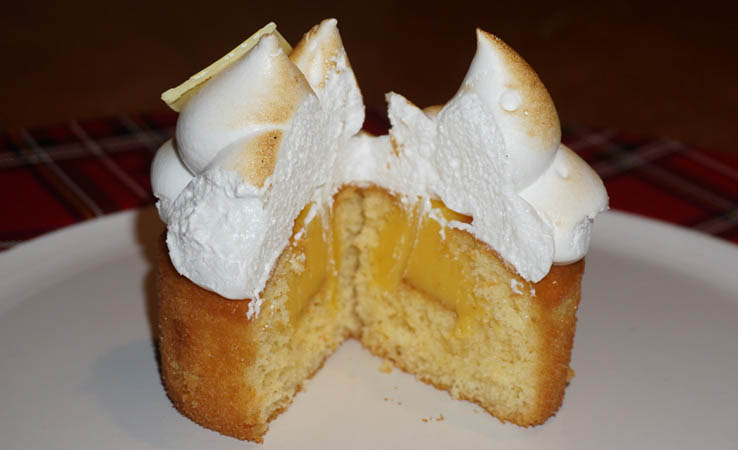 The cake itself was vanilla. It wasn’t too sweet, but it was tasty. The filling was a lemon custard that wasn’t very sweet, nor very lemony. It was kind of weird-tasting. The topping was a flamed meringue. It was sort of a sticky, fluffy marshmallow without much taste to it. I’m a huge fan of lemon desserts, but this one just fell flat for me. In fact, none of us cared for it at all. 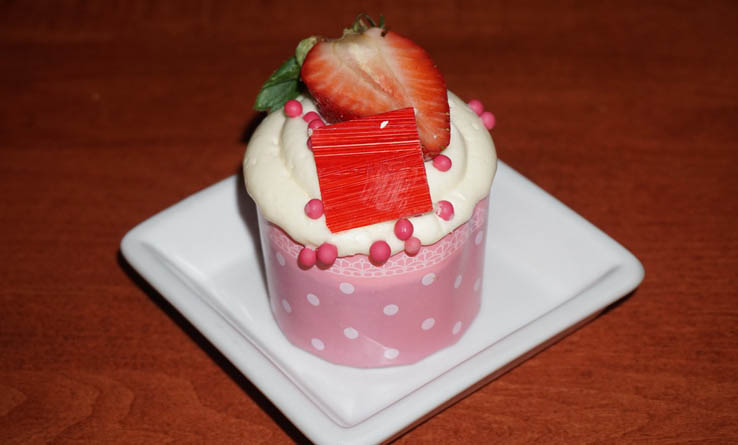 Our favorite of the bunch was the Strawberry Cream Cheese Cupcake. This cupcake features vanilla cake, strawberry mousse filling, and cream cheese frosting, topped with crunchy pink pearls, a white chocolate square, and a half a strawberry. 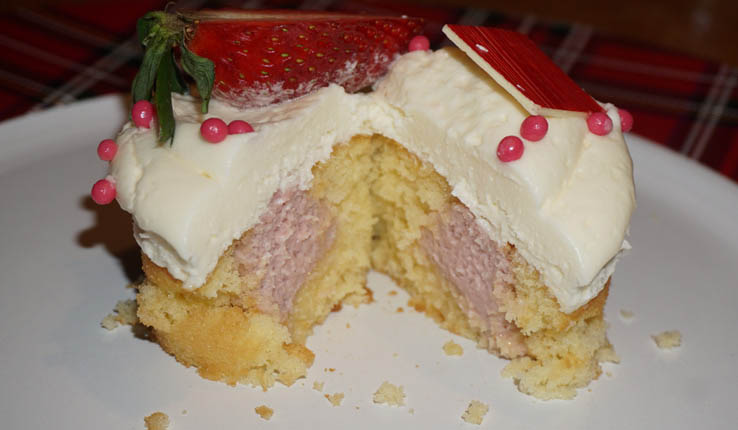 This cupcake is sheer perfection. We all loved it! The cake was a bit crumbly, but it was moist and mild, the perfect base for the sweet, berry filling and the smooth, creamy frosting. The Strawberry Cream Cheese Cupcake is one of my all-time favorites and I plan to get one every time we visit Be Our Guest. I think we’ll have to get 3 of them so we don’t fight over it!

At this time, the only way to get the Master’s Cupcake is to make an advanced dining reservation to eat at Be Our Guest Restaurant. The cupcake is available during breakfast, lunch and dinner. The Lemon Meringue and Strawberry Cream Cheese Cupcakes are currently only available on the lunch and dinner menus.

This restaurant is very popular, so book your reservations early. You can also check back the day before your visit. Lots of people change their plans at the last minute and cancel their reservations 24 hours in advance to avoid being charged a fee.

So far, we’ve only managed to taste test 6 of the 14 cupcakes in the challenge! I’m still not sure if we’ll be able to finish our Disney Cupcake Challenge. Between the fact that we only get to Disney World two or three times a month, and the nature of Disney’s ever-changing menus, we may never be able to complete the challenge. But, we’ll keep on trying.

We are heading to Hollywood Studios in a couple of weeks, so we’ll make the sacrifice and try two more cupcakes on the list, if we can find them, the Chocolate Peanut Butter Crunch Cupcake from Trolley Car Cafe and at least one of the Star Wars Cupcakes from Backlot Express.