Several days ago, we popped over to the EPCOT theme park at Walt Disney World. We are luckily just a short drive away. Little Dude was excited to ride Test Track and Soarin’ again. But, my thoughts were on something a bit sweeter!

One of my favorite blogs, one that combines my love of Disney AND food, The Disney Food Blog, had recently issued a challenge that I could not ignore. It was a Disney Food Challenge to eat all 14 of Disney World’s best cupcakes! Of course, the three of us couldn’t possibly manage that in just a few hours, so we focused on getting three of the EPCOT cupcakes listed in the challenge:

The first stop was the Sunshine Seasons quick service eatery. Hubby and Little Dude walked around each different food station, trying to decide what to have for dinner. I, on the other hand, lined up at the Bakery counter to order our first two cupcakes.

After a light dinner, we dug in to dessert.

The first cupcake we sampled was the Rose Gold Minnie Ears Cupcake. It’s really adorable, and quite tasty, too! The ears and bow are made of fondant. The frosting is vanilla buttercream. 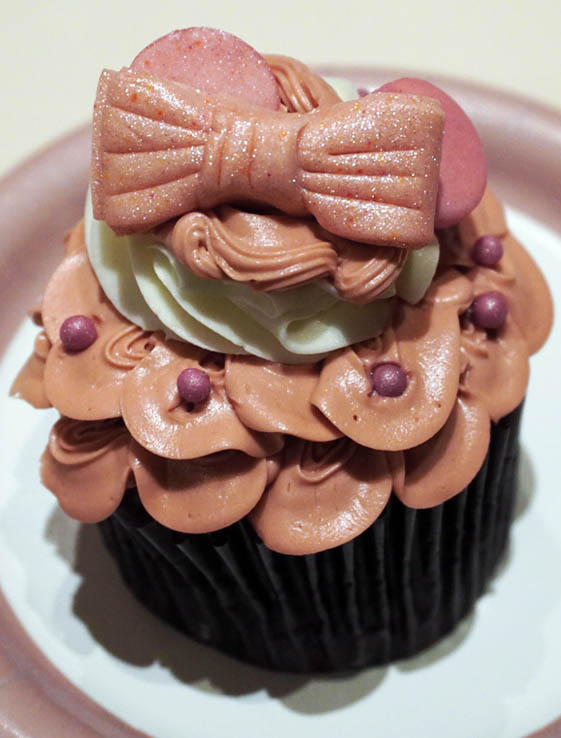 The cake inside is a vanilla and Nutella chocolate marble.

The frosting was absolutely delicious. Little Dude wanted it all for himself. The cake was good. Not as flavorful as expected, but mixed with the sweet frosting, it worked well.

The second cupcake we sampled was the Peanut Butter and Jelly Flower Pot Cupcake. This cupcake is beautiful and unbelievably delicious. It’s very, very sweet, but the mix of flavors is just amazing. It’s one of the best cupcakes I’ve ever had. 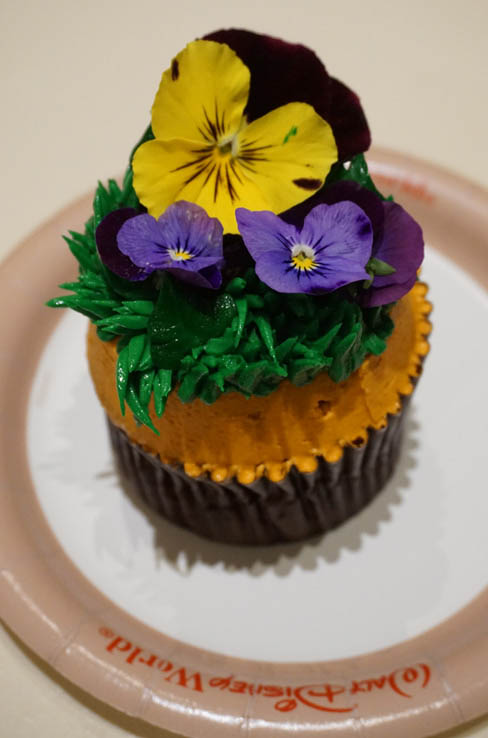 The peanut butter frosting is topped with piped “grass”, cookie crumb “dirt”, and REAL edible flowers (yes, I tried them)! The cake is vanilla.

Once you cut it open, you’ll find a glob of sweet jelly filling. Heavenly! 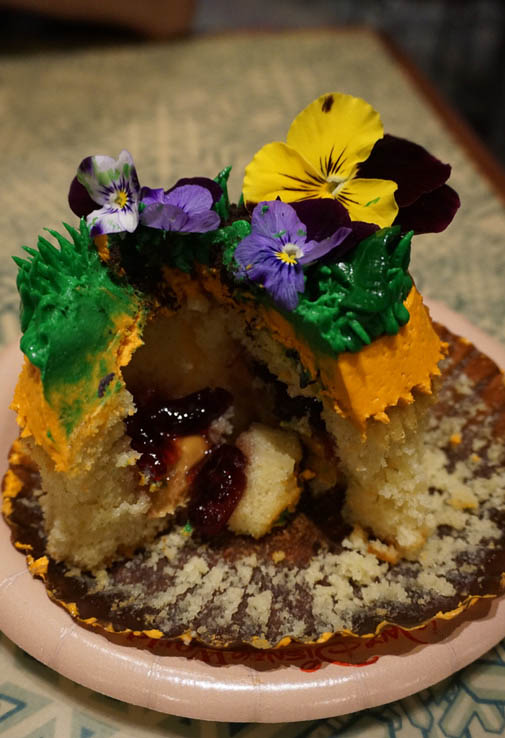 By the time we were done, we were all sugared up. Little Dude was bouncing off the walls to do some stuff, so off we went.

Towards the end of the night, I popped into Fountain View Cafe for the last cupcake of the day, the Spaceship Earth Cupcake. There were none in the case, and the wonderful cast member even sent someone back to the annex to try to find one for me, but they were sold out! She said they are extremely popular, so if you want one, go early in the day!

We shuffled away in disappointment, which was quickly forgotten with a ride on Soarin’.

But, I couldn’t let the challenge go. So, the next day, I dropped Little Dude at school and headed back to EPCOT, determined to get that Spaceship Earth Cupcake and at least one more on the list!

It was a warm, gorgeous day at the park. I had to stop and take a few pictures before I headed to the Fountain View Cafe for the cupcake. 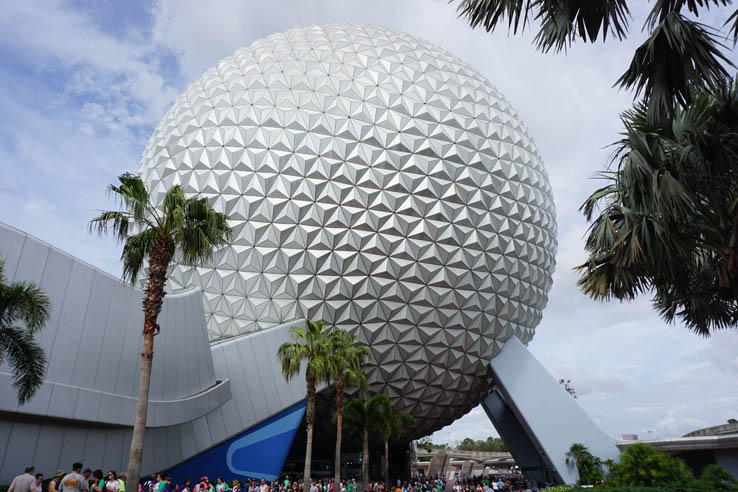 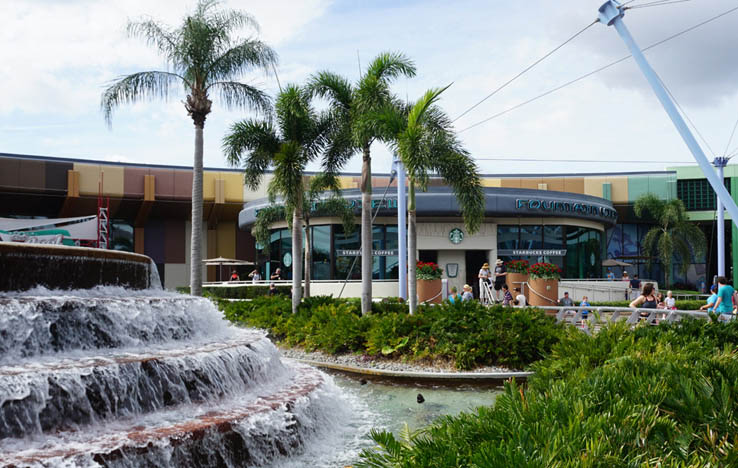 This time – success! I picked up the Spaceship Earth Cupcake from the Fountain View Cafe, along with a special Valentine’s Cupcake only being offered on February 13th and 14th. I then headed back to the car to put them in my cooler, only getting sidetracked by the appearance of the amazing Muppet Mobile Lab. 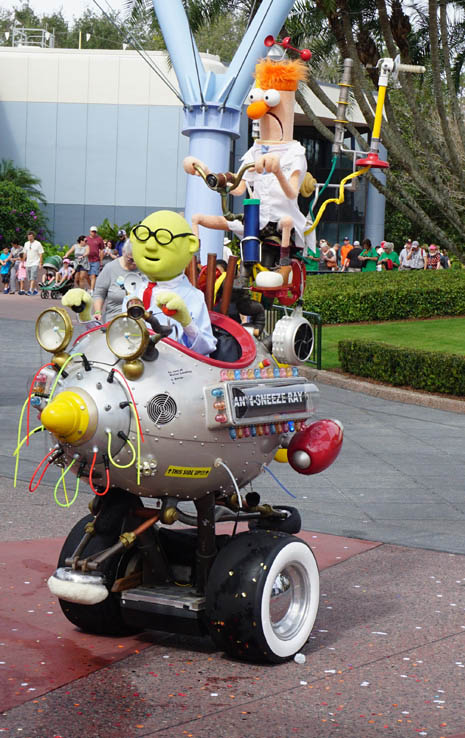 Muppet Mobile Lab is an advanced audio-animatronic remote-controlled show-on-wheels that features Beaker and Dr. Bunsen Honeydew from The Muppets. It was so fun to see. They tell jokes and interact with the audience. Definitely stop and check it out if you ever seen them hanging around in the park!

Once I left EPCOT, a made a little detour before heading home – to Wilderness Lodge! Wilderness Lodge is one of my favorite resorts on Walt Disney World property. Its design was inspired by turn-of-the-century National Park lodges in America’s Great Northwest. It’s a beautiful mix of rustic and luxury, with flowers, waterfalls and nature trails outside, and a massive stone fireplace, totem poles, and wood beams inside. 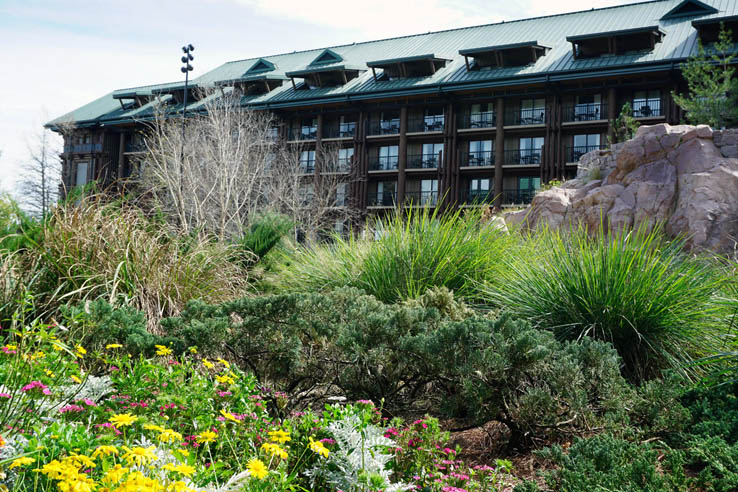 I did take some time to walk around and enjoy the atmosphere, but not too long, as I was on a mission. Another cupcake on Disney Food Blog’s Challenge could be found at one of this resort’s quick service eateries, The Roaring Fork. The cupcake is called the Campfire Cupcake. Once cupcake was in hand, I headed home to share the sweet taste of successful cupcake hunting with Hubby and Little Dude!

First up on our taste test was the unique Spaceship Earth Cupcake from Fountain View Cafe at EPCOT. 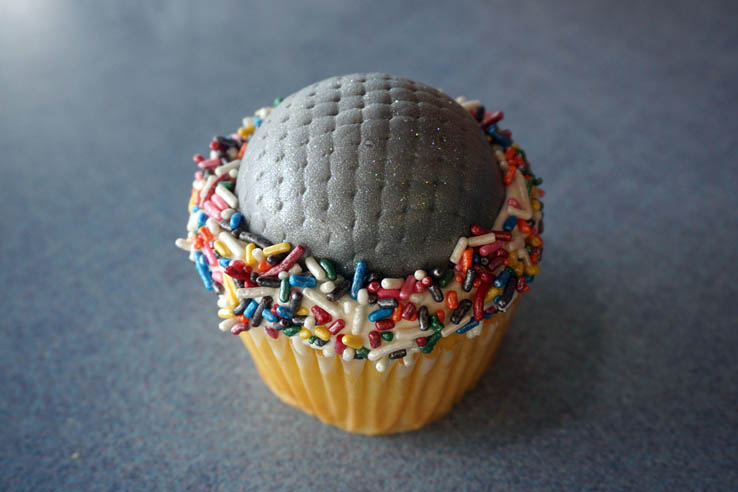 The Spaceship Earth “ball” is made of vanilla cake, not frosting, and it’s covered with a gray fondant lightly sprayed with glitter. The rest of the top is covered with vanilla buttercream frosting and multicolored sprinkles.

The rest of the cake is also vanilla, with a mild strawberry filling at the very center. 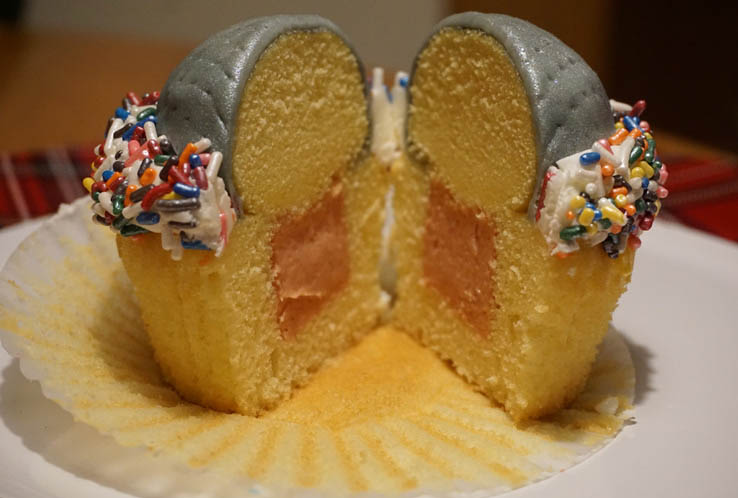 This cupcake is really, really tasty! The vanilla cake is sweet and flavorful enough not to be boring. The vanilla frosting is so delicious. Even the gray fondant is pretty decent tasting. I didn’t think the strawberry filling added a ton of flavor to the cupcake, but it didn’t take away from the taste either. Overall, it’s an amazing looking AND tasting cupcake!

Next up was the specialty Valentine’s Cupcake from Fountain View Cafe at EPCOT. Disney makes seasonal desserts all throughout the year for every holiday and occasion they can think of. It’s really fun to discover new options every time you go to the parks. But, it can be frustrating as well when you find a favorite and it’s only around for a limited time! 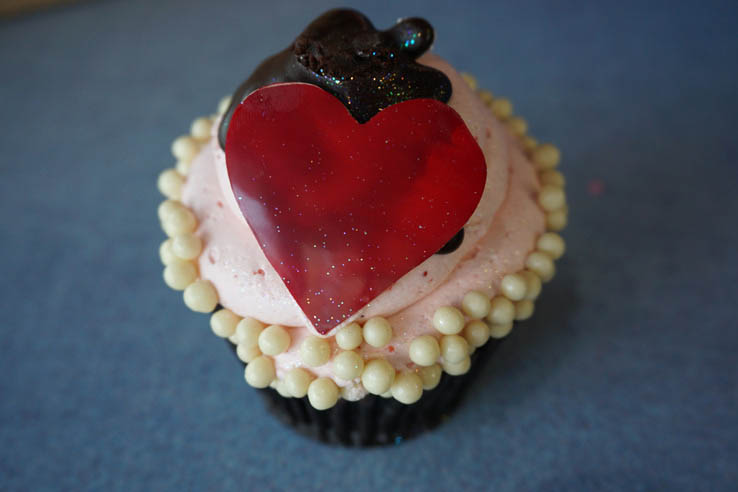 Inside the chocolate cake, there was a strawberry white chocolate mousse center. 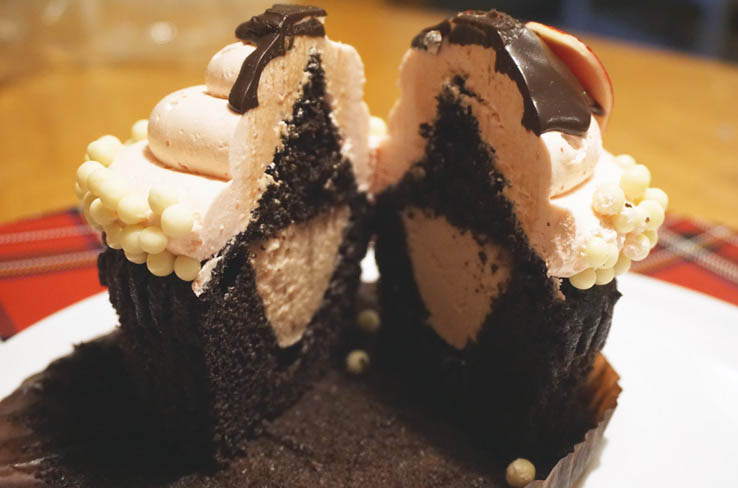 The chocolate cake was moist and delicious! The mousse center was too mild to add much to the taste, but the strawberry frosting was a nice complement to the richness of the cake and the chocolate ganache. The one thing we wished was left off this cupcake was the crispy strawberry pearls. They had a neat crunch, but a weird flavor. Still, we’re glad we tried this one.

Last up is the Campfire Cupcake from the Roaring Fork at the Wilderness Lodge Resort.Okay, I know this cupcake isn’t from EPCOT and this post is about our EPCOT Cupcake Challenge. But, it IS part of the Disney Food Blog challenge, and Hubby was really keen to try this one, so how could I not add it on?!

The Campfire Cupcake is adorable! It has rich chocolate cake topped with vanilla buttercream frosting. The frosting is topped with crushed cookie “dirt”, candy rocks, and a campfire made of frosting. To one side, there is a chocolate stick topped with a mini marshmallow.

It’s pretty messy once you get into it. The cookie crumbs get everywhere! But, it’s so worth it! Inside, you’ll find a rich marshmallow filling. 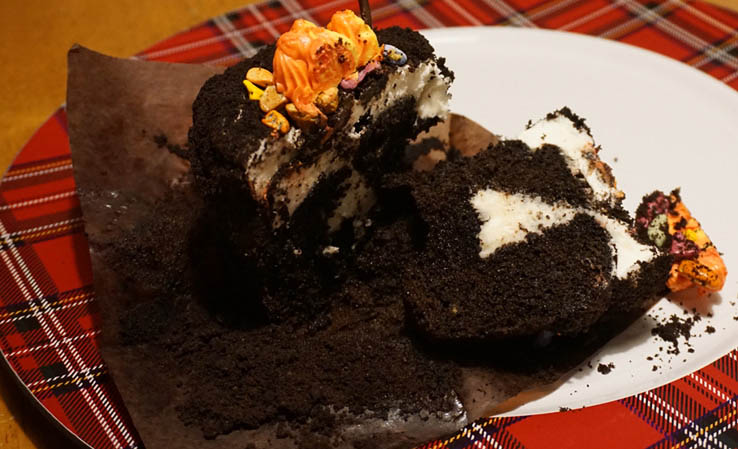 All the elements put together make this one delicious cupcake! If you love chocolate and s’mores, this is the one for you. The cake was moist and rich, but not too sweet. The sweet frosting and rich marshmallow just mixed perfectly with the cake to make this cupcake flavorful, even a bit sinful!

It was a great finish to part one of our 2018 Walt Disney World Cupcake Challenge, inspired by The Disney Food Blog. So, out of the 14 suggested cupcakes, we’ve tried 4 so far:

We’re heading to Animal Kingdom theme park really soon, so look for our review of another cupcake on the list, the Cotton Top Tamarin Cupcake. This is one challenge we are determined to conquer!

Have you tried any of the specialty cupcakes at Walt Disney World? If so, let us know in the comments what you think of them! 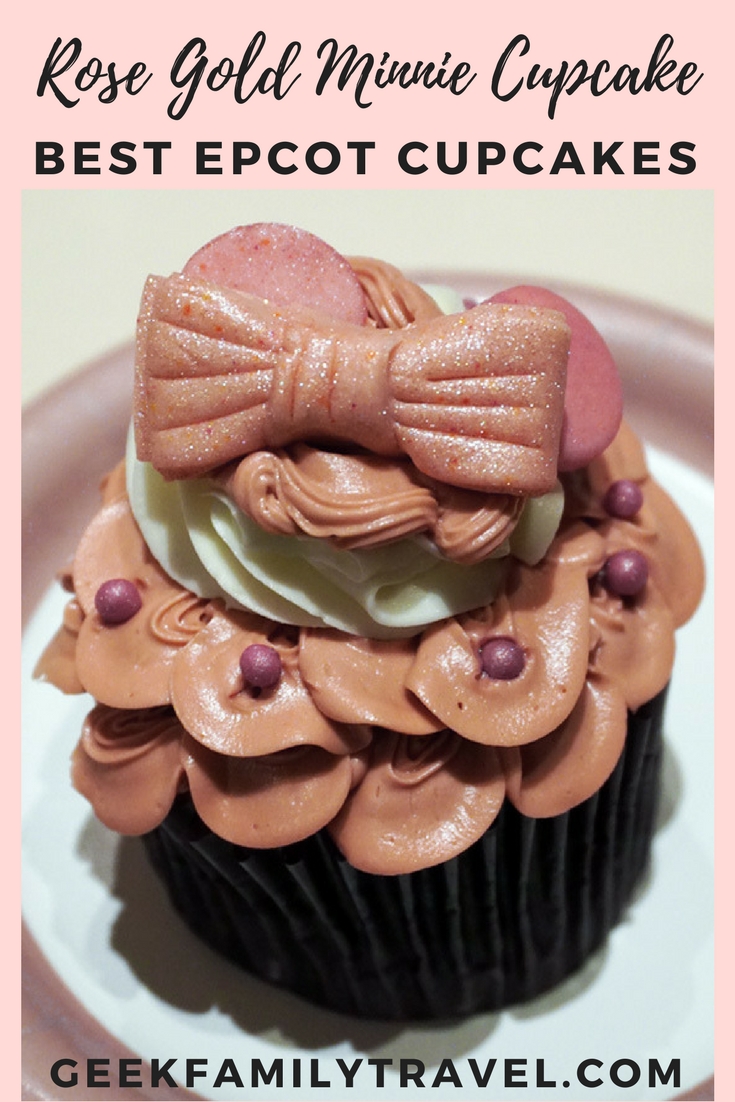