Last fall, we took a quick trip to Chicago. It was my first time visiting Chicago, although I do remember driving through it one summer when I was about twelve, on the way to a friend’s farm in Wisconsin. Little did I know what treasures awaited in the city. Hubby had been there several times before, visiting family when he was younger. He had fond memories of visiting the Museum of Science and Industry, so that was a must-see for us.

We planned our trip around Little Dude’s Fall Break, but I waited until the last minute to book our hotel. Big mistake! The Chicago Cubs made the playoffs and two home games were happening during our trip. So, our budget-friendly getaway was threatening to be a budget-buster. Downtown hotel prices were through the roof as baseball fans prepared to descend on the city!

So, we ended up basing ourselves in the Lincoln Park-Park West area near Wrigley Field, north of the city, at the Days Inn Chicago on West Diversey Parkway (now called the Hotel Versey-Days Inn Chicago). The room was about $100 cheaper per night than the less expensive ones still available downtown.

Since we stayed there, the hotel has been undergoing much-needed renovations. Our room was damp, musty, with thin walls. Breakfast was sparse. But, it was clean, safe, and had a very helpful staff. We absolutely loved the neighborhood, especially since we were an easy walking distance to Lincoln Park. Being close to park space, with a playground and lots of room to run, is essential when you have an energetic child like Little Dude. The Hotel Versey-Days Inn Chicago is also across the street from a Trader Joe’s and right next to Stan’s Donuts. Yum! Need I say more? 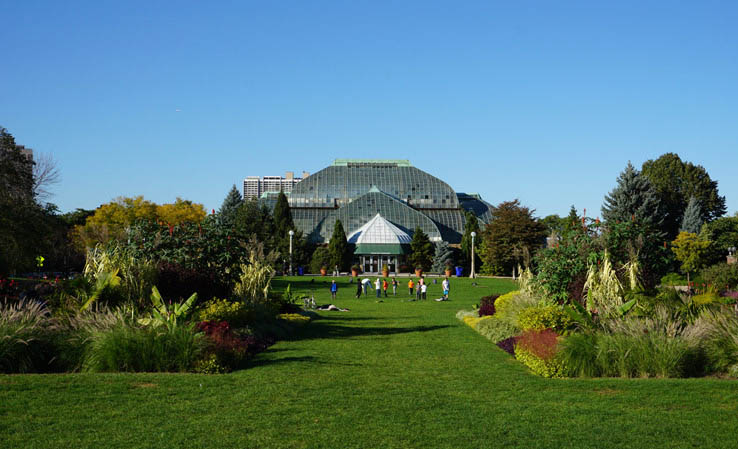 We spent four days in Chicago and crammed in as many sights as we could, while still reserving some play time for Little Dude at various locations. Our first evening was spent walking through the small, but interesting Lincoln Park Zoo. Afterwards, we ate dinner at the somewhat touristy, but kid-friendly American eatery R.J. Grunts (very close to the zoo, which is why we picked it). We walked back to the hotel along North Clark Street, and stopped for dessert at Molly’s Cupcakes. There are no words to express how delicious the cupcakes were! I still dream about them. Molly’s is a must-visit if you’re in the area!

Museum of Science and Industry

The next day, we ordered a taxi for the ride down to the Museum of Science and Industry. We planned to utilize the bus and “L” train system for our transportation. We had already bought our Ventra cards at Chicago-O’Hare Airport and had ridden the Blue Line train and a bus to our hotel the afternoon before. But, with the museum located on the south side of Chicago, quite a distance away, we felt the taxi was our best bet to get to the museum during rush hour. It was well worth the cost to us. 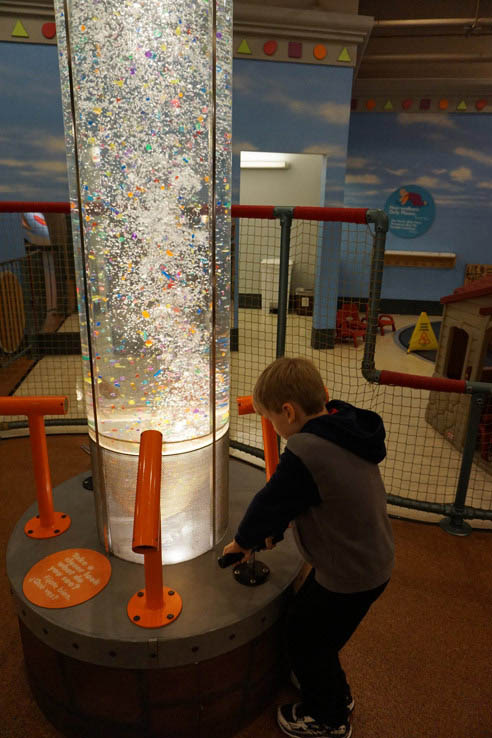 We spent the entire day at the massive MOSI. For geeks like us, it was a little slice of heaven! There’s so much to share about the museum that I wrote a separate post about it, so I could include my favorite tips. Needless to say, if anyone in your family has any interest in science and technology, the Museum of Science and Industry is a must-see!

Once the Museum of Science and Industry closed for the day, we took a taxi back downtown and asked to be dropped off at North Michican Avenue, just on the north side of the Chicago River, so we could walk a few blocks north to the John Hancock Building and visit the observation deck there, 360 Chicago. Little Dude is a massive fan of skyscrapers. He plans to build a few when he grows up! So, while he was bouncing with excitement, I was doing my best to hide my fear of heights and tall buildings, trying to see the experience through his eyes.

The elevators at the tower whisk you up to the 94th floor, where you can enjoy 360 degree views of Chicago, Lake Michigan, and the surrounding area. They also have an experience called Tilt, where you stand on a moving glass platform that tilts you out over Michigan Avenue, for an additional cost. No way I was trying that! But, Hubby and Little Dude enjoyed it. 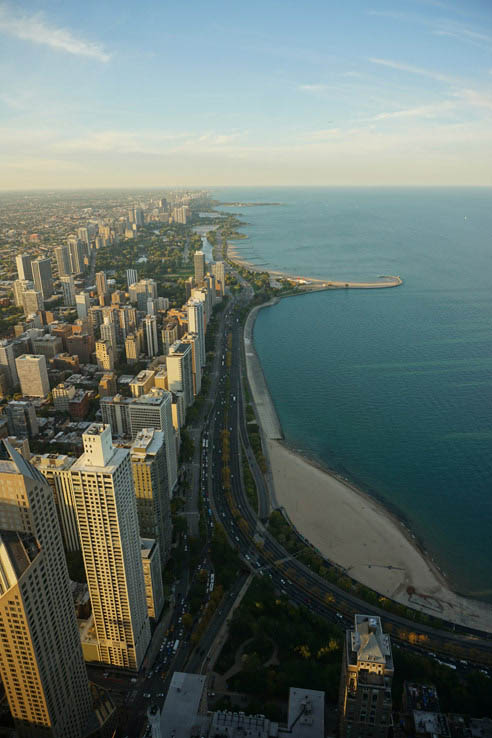 We left the John Hancock Building just after sunset and walked around a bit, watching the buildings light up as darkness fell. On a budget and with Little Dude in tow, we had to find something quick and kid-friendly to eat for dinner, so we popped into an Epic Burger, a new-to-us chain restaurant where we enjoyed some very tasty burgers and fries.

The next day, we needed a better start than the hotel breakfast could provide, so we walked a few blocks down to Yolk, a great restaurant that serves large, hearty breakfasts. It was a Saturday morning and quite busy, but the service was quick and we were seated after only a few minutes wait. After we stuffed ourselves, we made our way by bus to the downtown area to walk along the Chicago Riverwalk.

After exploring the Riverwalk, we headed south a few blocks to Millennium Park to visit Cloud Gate, that huge reflective sculpture otherwise known as the Bean. We took lots of pictures of our distorted reflections! Then, we moved along to the Crown Fountain, which was closed for renovation! Travel planner fail! In hindsight, I’m glad it was closed. The weather was quite chilly for us Floridians, so not being able to play in water was probably a really good thing. 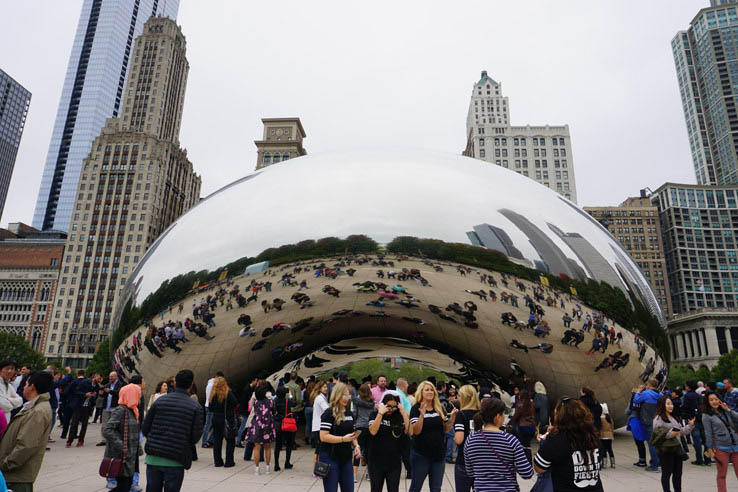 Then it was on to Maggie Daley Park, which is just across South Columbus Drive from Millennium Park. There is a pedestrian bridge to get you across the street safely, especially if you’re trying to keep an eye on more than one kid!

Maggie Daley Park is an absolute must-do in Chicago with a kid under 12. There’s a skating ribbon, which features ice skating in winter and roller skating the rest of the year. There are also rock-climbing walls. These two experiences charge admission. But, the standout feature of the park is the three-acre Play Garden. Be prepared to stay here for several hours with your little ones! There are pathways through the “Enchanted Forest”, a “Tower Bridge” suspension walkway strung between two towers, multiple slides, various boats and lighthouses to climb, and swings, all with the beautiful city skyline as a backdrop. 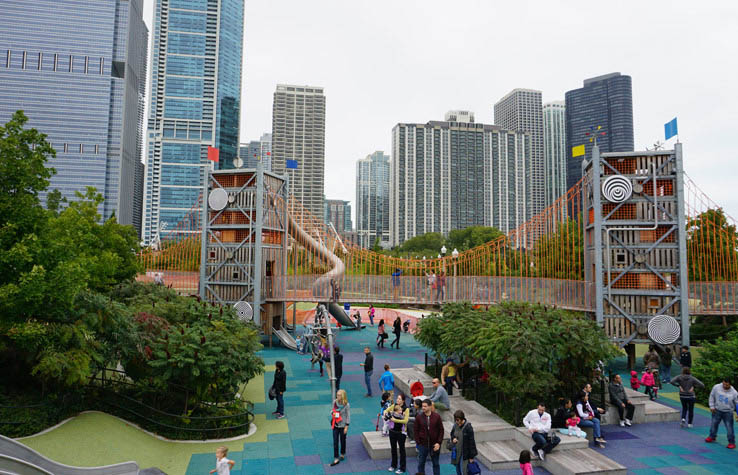 After a couple of hours at the Play Garden, stomachs were rumbling and another skyscraper was calling. We stopped into Potbelly Sandwich Shop, just a few blocks from our destination, the Willis Tower, for a quick bite. Service was slow, but the food was decent. Then, it was on to the Willis Tower.

The autumn morning haze had nearly lifted, so we headed up to the Willis Tower’s observation deck on the 103rd floor, called Skydeck Chicago, to check out the views. One of the highlights of the Skydeck is the Ledge, several glass boxes that extend out from the tower, where visitors can sit or stand. There was a little bit of a wait for the boxes, but Hubby and Little Dude were patient and the payoff was big! They loved looking down at the buildings and street below. I loved that it was included in the price of the Skydeck visit! 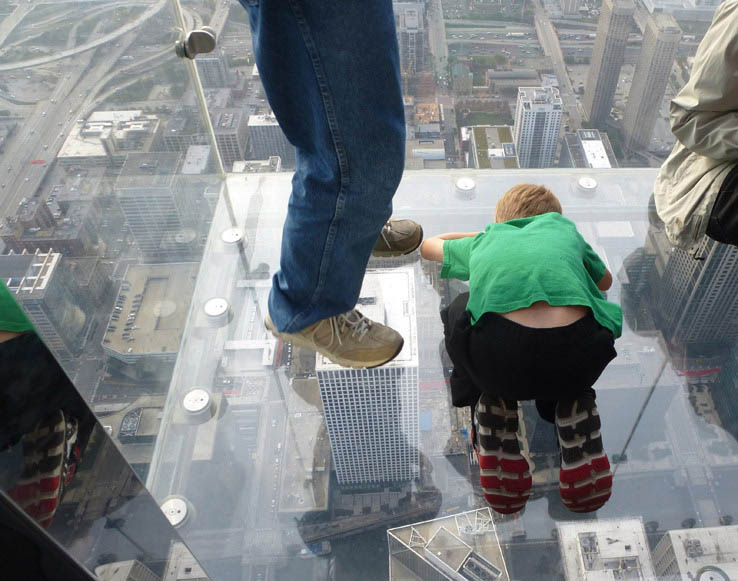 Little Dude wanted to go back to the Play Garden at Maggie Daley Park, so we headed back that direction, walking along West Jackson Boulevard. After a few blocks, we reached the Chicago Architecture Foundation. We popped inside for a few minutes to see their Chicago Model. The model is a large, detailed replica of Chicago, representing 400 blocks of the city. The Foundation also has a very cool gift shop. They also give amazing city tours. Hopefully we can take one on our next visit to the city. After another hour of play at Maggie Daley Park, we headed back to our hotel, stopping at Trader Joe’s for some food to eat in our room.

The next day was our last full day in the city, and the most stressful due to traffic. We had a quick breakfast at the hotel, then took a bus to Adler Planetarium. Little did we know, but Chicago Bears fans were already out in droves, descending on Soldier Field, which is next to Chicago’s Museum Campus, extra early for the afternoon game. It took forever to get through the traffic jam! We sadly lost a bit of touring time that we really could have used. But, we did our best to make the most of the time we had!

Once we arrived at Adler Planetarium, we spent a couple of hours exploring everything. The planetarium is not too big, but it’s packed with lots of interesting exhibits. There’s a large play area for younger kids. Little Dude got to blast off into space, as well as build a giant rocket. We checked out a great live show and also learned about the planets and the stars. For lunch, we grabbed a bite at the planetarium’s Cafe Galileo’s. It was decent food, slightly overpriced, but we got to enjoy a pretty view of Lake Michigan with our lunch. 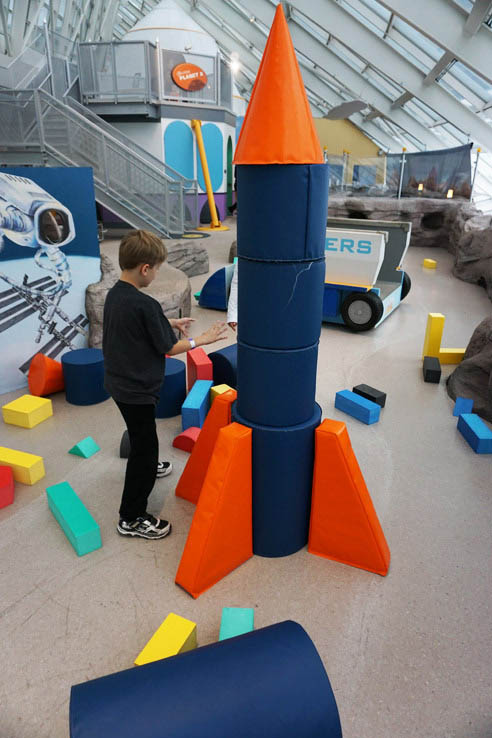 Once we were done at the planetarium, it was on to Shedd Aquarium, just a short walk away. Shedd Aquarium features all kinds of amazing sea creatures, as well as penguins, dolphins, amphibians, and more. There’s a play area for kids. Little Dude’s favorite was the yellow submarine. I think he spent about 45 minutes there, looking through the periscope and directing his crew! Little Dude was so fascinated with the aquarium that we stayed until closing and never made it to The Field Museum next door! It’s on the list for our next visit. Another quick dinner at an Epic Burger (Little Dude’s request) and our day was done. 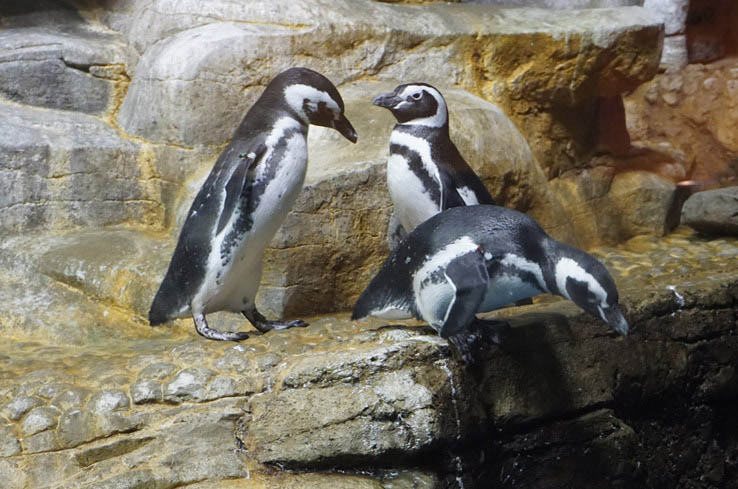 Departure day arrived all too quickly. We popped a few blocks down the street to Yolk for a hearty breakfast. Afterwards, we went to the playground at Lincoln Park, so Little Dude could run around a bit before having to be cooped up in a train and airplane. We were sad to leave Chicago. The fall weather was beautiful! A bit windy and cloudy at times, but just the right amount of cold to be comfortable while doing so much walking. We enjoyed all the sights we visited. There are still so many places to see, and more exciting eateries to try once Little Dude gets a more adventurous palate. We will be back, Chicago! Thanks for the memories.

Provides entry to Shedd Aquarium, Skydeck Chicago, The Field Museum, Museum of Science and Industry OR 360 Chicago, and Adler Planetarium OR Art Institute of Chicago. Other tickets purchased on-site at attractions.